headshot wrote: ↑
Tue Nov 15, 2022 8:47 am
I briefly heard a report on some ITV morning programme yesterday where they were talking about the benefit-cost ratio for HS2.

They said that for every £1 spent, there was a net financial benefit of £0.90.

Over what period? Why are the benefits being measured purely in financial terms??

Beware of this link to some naff news page: https://www.bucksfreepress.co.uk/news/9 ... n-reports/

Love some of the language in this:


Anti-HS2 figures have protested since the start that with modern technology such as laptop computers, this assumption is flawed.


Having conducted extensive studies they found the large majority of business travellers did some work on train journeys and almost half of businessmen's travel time was spent working.

The report added: “"Sixty per cent reported that they would do no work in the 'saved' time."

HS2 Action Alliance said more than 40 per cent of the projected monetised benefits of HS2 come from assuming businessmen do not work on trains.

Apparently only men work in business.

For those who may not have noticed, the above article is from 2012 - Anti-HS2 sentiment obviously has a long history.

The documents leaked by Andrew Gilligan to the Telegraph are several years old, and not particularly current. Obvs as with many issues, the Telegraph have written it up in as sh.tty a way as possible.
If truth is many-sided, mendacity is many-tongued
Top

In some good news, the line between Portishead and Bristol looks like it's finally going to get built, after decades of campaigning. It's not as good as it could be - it's only one line which means there's only one train an hour which pretty useless for commuters, but it's better than the nothing that currently exists.
it's okay to say "I don't know"
Top

Worth pointing out that HS2's capital expenditure during 2021-22 was £5.0bn with resource expenditure of £0.2bn. The previous financial year it was a capital spend of £3.3bn, and the year before of £2.3bn. Note that that's just money spent (higher than £8bn) - money committed will be higher, and extricating the company from the contracts it has committed to will cost a lot of money.

Note also that capital expenditure is investment money. Yes, it can be spent in different places, but the business case for HS2 is still positive, despite the insane ramblings of a decrepit old man. This money is not being wasted. It is being spent on improving transport in the country (an unarguable point), providing employment and investment in the economy, and Phase One is fairly well advanced now. Cancelling it would have a much bigger impact than that cretin Jenkins says.
If truth is many-sided, mendacity is many-tongued
Top

The inaugural post in the Generic Railway Thread on the Bad Science forum was about the then-nascent Ordsall Chord, and I am ecstatic to report that I have finally found an excuse to travel on it. 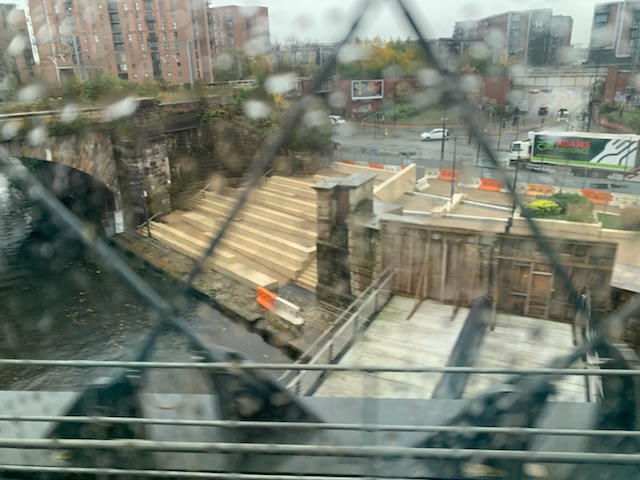 The most bashed bridges 21/22 list is out - about halfway down this page. Couldn't find the full list on the NR site, just an article.

Staines Railway bridge has fallen out of the top ten, which set me thinking. The bit that was getting bashed was the section of it over Laleham Road. However, most of the bridge is over the river. Do they have different bridge plates somewhere on the river section supports, so you can report it if you run your cabin cruiser or whatever into them or do you use the ID on the road section and just mention it was one of the river supports?
Some people call me strange.
I prefer unconventional.
But I'm willing to compromise and accept eccentric.
Top

Given it's the same bridge, the ones on the road section will do the trick. The engineers will be able to tell whether it was a boat or a lorry that smashed into the bridge, probably because there'll be a smashed lorry or boat next to the bridge when they arrive
If truth is many-sided, mendacity is many-tongued
Top

Amazing the kind of data they can get nowadays
We have the right to a clean, healthy, sustainable environment.
Top

El Pollo Diablo wrote: ↑
Tue Nov 15, 2022 7:32 am
Simon Jenkins' latest sh.t on the floor really is a masterpiece. In it he claims that making thousands of HS2 construction workers redundant would be good for the construction industry, and that cancelling HS2 would only cost the money that's been spent so far. Not going to link because he's a c.nt, but still

For some reason, a while back I found myself following Nigel Harris (editor of Rail Magazine) on twitter. A follow I often appreciate for its variety and humanity - and some lovely pictures.
He's just provided a link to this ...
https://paulbigland.blog/2022/11/15/sim ... never-was/
My avatar was a scientific result that was later found to be 'mistaken' - I rarely claim to be 100% correct
ETA 5/8/20: I've been advised that the result was correct, it was the initial interpretation that needed to be withdrawn
Meta? I'd say so!
Top
Post Reply
235 posts