Planetary death by a thousand cuts

Planetary death by a thousand cuts

We know we're killing the planet. Slowly? Quickly? I can't tell any more. Everywhere I look I see stories of the ingenious ways we're managing to f.ck up the only place we know of in the entire universe that can sustain us.

The latest is a new study published last week which looked at the impact of discarded disposable surgical masks on coastal ecosystems. Surprise surprise, what they found wasn't good.

If I'm reading the study right (it's getting late, I'm tired, and I'm generally pissed off with the world, so I may not be) the researchers collected discarded masks from beaches in Hong Kong and then took them back to their lab. They then studied how the masks broke down in seawater and took samples of that water. They used the water to grow copepods, an abundant group of zooplankton, and watched what happened.

They found that high levels (100 microplastics/mL) of microplastics from the masks caused the development time of the copepods to increase - they took longer to mature. The same high levels also caused them lengthen the space between broods and reduced their fecundity. At what they called "environmentally relevant" levels (10 microplastics/mL) these differences were fortunately absent. However, even at these lower levels the length of their poo increased significantly, though I'm unsure if there are any known environmental consequences to this (I wonder who got the job of measuring them).

[Microplastics released from [surgical masks] can be ingested, be egested, and accumulate in the intestine of marine copepods, causing an adverse effect on their fecundity. As one of the most abundant classes of zooplankton and primary consumers in the marine environment,30 copepods play a critical role in the bioaccumulation of contaminants in the marine environment.33 MPs can enter the body of higher marine organisms through bioaccumulation and biomagnification, resulting in potential harmful effects. In addition, the reduced fecundity of copepods will also lead to the reduction of food resources for higher marine organisms, thereby threatening the balance of the marine ecosystem.

Re: Planetary death by a thousand cuts

Analysis by the Natural History Museum published last month shows that the UK has an average of 53% of its native wildlife intact, putting it in the bottom 10% of the world's countries.


Under the analysis, scientists looked at data from ecological studies from around the world covering over 58,000 species, including animals, plants and fungi. This data was used to produce a metric, known as the Biodiversity Intactness Index (BII), for countries and island groups around the world... Globally - biodiversity intactness, which represents the proportion of the original number of species in an area that remain and their abundance - is measured at 75%... The UK is one of the most nature-depleted countries in the world. Even in the twenty-first century, the nation's BII fell from 53.88 in 2003 to a low of 52.31 by 2007. It is yet to return to its former level. While gains are predicted until 2050, this will only reach 56.32 in the most generous scenario.

They have a map of the Biodiversiy Intactness Index: 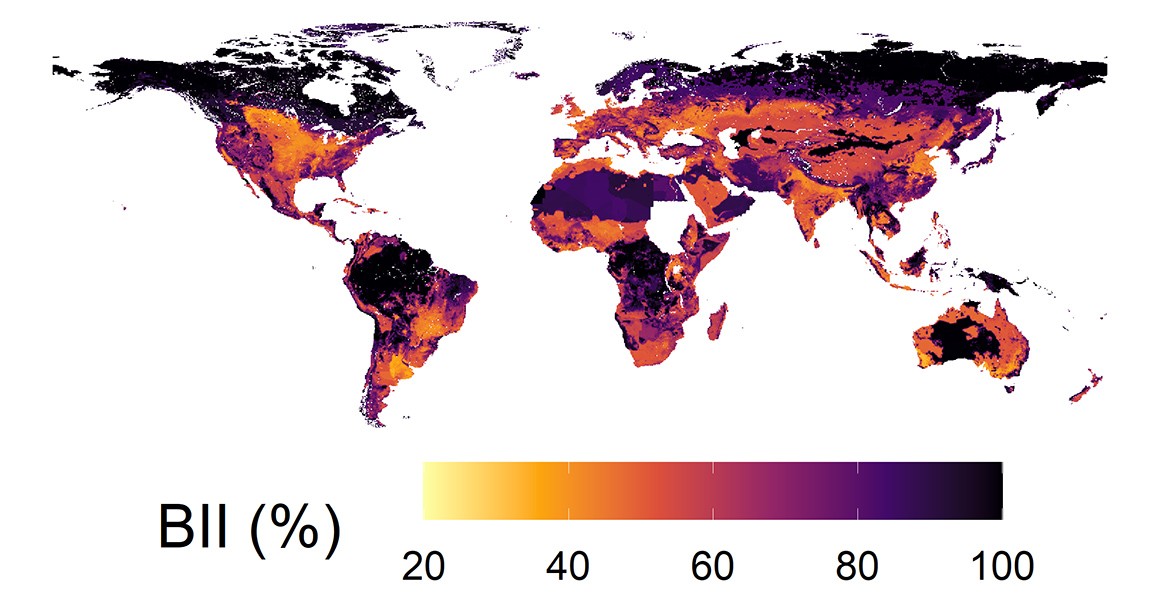 Re: Planetary death by a thousand cuts

It's sad, isn't it. Britain's biodiversity has been trashed longer than most, so it is perhaps no surprise we have done it more thoroughly than most. We have long been a densely populated nation much of whose land is suitable for economic exploitation.

It does depend on borders. If Scotland and Wales were different countries, England would be really bad. Similar levels of trashing can be seen in other long-standing well-developed lowland areas of the continent, but done by country they do can do better because they have more extensive highland areas.

Likewise we see it is the great prairies in the USA, that have been transferred to mass agriculture, that are the most thoroughly trashed, while the deserts and hilly woodlands are less badly trashed. Though the Saudis demonstrate that you can trash a desert.

And it has been getting worse in recent years because of the pressure to increase productivity and so keep pretty much everything except the crops you are growing.

I remember being so disappointed when I discovered that Organic Milk didn't mean cattle was grazed in flower-filled meadows.

Was it you who recently posted some stuff about how we might be better in this country intensifying our agriculture even further, so we can reduce the land area we grow it on, and thus have more to restore? But it is only going to happen if someone buys up the surplus land and restores it, rather than thinking it will just happen if you dob farmers a few quid for biodiversity.

I remember being so disappointed about 20-odd years ago when agricultural land prices fell really low that the government didn't buy large amounts up to restore to nature.
Top
Post Reply
3 posts • Page 1 of 1