I haven't updated this thread for a while, but the unfinished business left by the suspension of the CBA strike remains unfinished. Brandon Lewis, during his brief tenure as Justice Secretary agreed to implement the recommendation in the Bellamy Review for a 15% increase in legal aid fees paid to criminal barristers. But prosecuting barristers and defence solicitors fared less well. As mentioned in the previous post, the increase in fees to defence barristers has not been matched by an increase in the fees the CPS pays to the independent barristers it engages to prosecute, and cases are collapsing all over the country because prosecutors cannot be found.

Lewis (and Raab before and before him) have also failed to implement the Bellamy recommendation of a 15% increase in legal aid fees to criminal defence solicitors. As a result the Law Society have just announced their intention to seek a judicial review.


Law Society wrote:The Bellamy review, published towards the end of 2021, recommended an immediate 15% uplift in fees for solicitors and barristers as soon as possible. Publishing the government's final response a year later, the Ministry of Justice said solicitor firms would see a total fee increase of around 11%. Today, Chancery Lane [The Law Society] said it has sent a pre-action letter to the government.

Society president Lubna Shuja said: ‘We argue the lord chancellor’s decision not to remunerate solicitors by the bare minimum 15%, which the independent review said was needed immediately over a year ago to prevent the collapse of the criminal defence sector, is unlawful, as is the decision not to take action to address the risk of local market failure.

‘We are seeking a commitment by the government to withdraw both decisions and reconsider them within a mutually agreed timetable. If not, we will issue a judicial review seeking an order to quash them.’

The graph below (taken from the Law Society Gazette) gives an indication of the scale of the problem, and is revealing from both a relative and an absolute perspective. In relative terms, it shows that the number of duty solicitors for legal aid has fallen by 25% just in the last five years. In absolute terms it shows that England and Wales, with a population of around 60 million, has only 3,600 such solicitors. Increasing their fees in the way Bellamy recommends would cost - in macroeconomic terms - peanuts (there are figures for the total legal aid budget upthread). Restoring their numbers to something consistent with a civilised democracy would also be cheap . The criminal justice system is falling apart in front of our eyes, many of the problems could be fixed cheaply and simply, and the government simply refuses to do that. 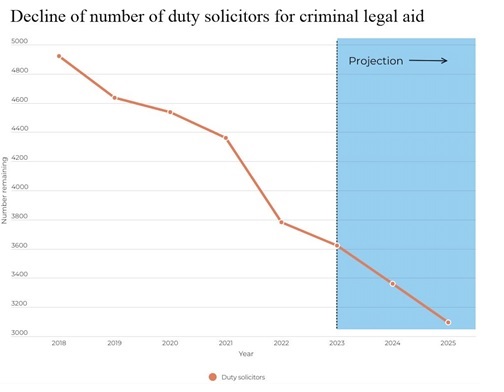 In six days the Lord made the heavens and the earth, the sea, and all that is in them. The human body was knocked up pretty late on the Friday afternoon, with a deadline looming. How well do you expect it to work?
Top
Post Reply
51 posts