Aye, but we all know that this Govt are so good at providing mass catering for 10 days for *just* £30...
Top

I stayed at the Heathrow TL last March for about £50. Assuming they are desperate for business, could the Govt not have negotiated a cheaper rate??

I'd hope that includes food, unless people are expected to pop down to the chippie?

According to the BBC, "The £1,750 fee includes three meals, tea, coffee and water,"
My avatar was a scientific result that was later found to be 'mistaken' - I rarely claim to be 100% correct
ETA 5/8/20: I've been advised that the result was correct, it was the initial interpretation that needed to be withdrawn
Meta? I'd say so!
Top


... Boris Johnson dressed up in a white coat. I think he’s supposed to appear medical and scientific, but only ever succeeds in looking like he’s got a lovely bit of pork cheek he can do you for £3.50

TBF with this bunch of dipsticks we are lucky it isn’t:-

It's meta, so it is allowed.
Top

It doesn't say how many cases that was, but for sure (a) it probably would have been much higher if returned travellers had been allowed to go home and self-quarantine on trust, as in the current UK system and (b) it's a really low number compared to the UK, for example, even scaling for population.


Victoria state was the epicentre of Australia's second wave, accounting for more than 90% of its 905 deaths.

England is on 183 deaths per 100,000. It has had that many deaths (as a proportion) in the past ten days, and that's with things coming down off the third wave peak. London, population 9 million, has had about 15,000 deaths (maybe nearer 16,000 if you look at death certificates).

So, yes, it's hard. Like all the other hard things to do during this pandemic, not doing the hard thing leads to everything being much harder later on.

The UK's hotel quarantine plan, like the 10 years in prison thing, only applied to arrivals in countries on a "red list" anyway.
molto tricky
Top

The UK's hotel quarantine plan, like the 10 years in prison thing, only applied to arrivals in countries on a "red list" anyway.

New analysis of passenger data by the Labour Party suggests 10,000 passengers will arrive in the UK on Monday from countries where the South African or Brazilian variants of Covid-19 are circulating but which are not on the Government’s ‘red list’. Those passengers will not be required to quarantine in hotels under the UK Government’s planned system.

Well for example Austria isn't on the list and there's so much SA variant in Austria that you can't even go to Austria from Austria.

shpalman can I just say that your catty covid coverage is probably my favourite bit of online covid-related content. I'm really enjoying it. Please keep it up.
He has the grace of a swan, the wisdom of an owl, and the eye of an eagle—ladies and gentlemen, this man is for the birds!
Top


Border Force sources told the Guardian that all immigration control staff had received a lengthy email with five attachments, detailing official guidance for carrying out the new checks at the border, at 9.25pm on Sunday. The rules came into effect at midnight.

Significant numbers of staff would not have seen the email when they started their shifts on Monday, the sources said. One Border Force operative on duty at Heathrow airport during the first day of the checks described the process as “an absolute joke”. The Home Office has been approached for comment.

The BBC were interviewing a couple of the first group of red-listers.

One of the quarantiners expressed surprise that while they were having to quarantine for having merely passed through a red-list country the people sat immediately across from them on the mumblety-hour flight were simply allowed to go on their way as their point-of-origin wasn’t on the list.

I see a small flaw in this approach ...
It's meta, so it is allowed.
Top

Matatouelle's mum has had a bad medical diagnosis, and so she needs to go and visit in Sri Lanka asap. Apparently it is easier for me as a UK citizen to enter Sri Lanka, than it is for Matatouelle as a Sri Lankan citizen. According to the official website, in Covid times everyone including citizens has to have an Electronic Travel Authorisation (ETA) to enter the country. In normal times, this is the tourist visa - you fill out the form, pay the fee and in 24 hours get approved (sometimes it only takes minutes). The catch? The form hasn't been updated to allow you to put "Sri Lankan" in the "Country of Citizenship" field. Emailed to ask the ETA people if we misunderstood the requirement and she doesn't need it or needs something else, and they directed us back to the form that doesn't work.

The SL High Commission has a form for requesting repatriation - its not clear if that is for returning to SL for good and they pay for flights and tell you when you're flying, or if it is just they give you a permit to enter SL on arrival from a certain flight. Filled out the form anyway, since no-one at the High Commission answers the phones so you can't find out.

And we still have no idea if the 2 weeks hotel quarantine requirement is for tourist visa holders only or everyone. If she could quarantine in the self-contained apartment within her parent's house that would save us a massive amount.

Having information is great, isn't it? AAAAAAARRRRGH!
Top

Bird on a Fire wrote: ↑
Tue Feb 09, 2021 3:35 pm
Yeah, when I got stuck at Heathrow over New Year all the hotels were doing discounts down to about £50/night for a room. Block bookings should be cheaper.

I'm not sure. The hotel and its staff will have to take special care against cross infection, and I don't know whether there's supposed to be control of the corridors to make sure people stay in quarantine ( 10 days, dec-ine?).

And your £50 rate was open to anyone, whereas people willing to book into a plague hotel will only be travellers who are obliged to stay there, so there may not be enough demand to keep the rooms filled.

I think the question was raised earlier as to whether that's meant to be a full board rate. 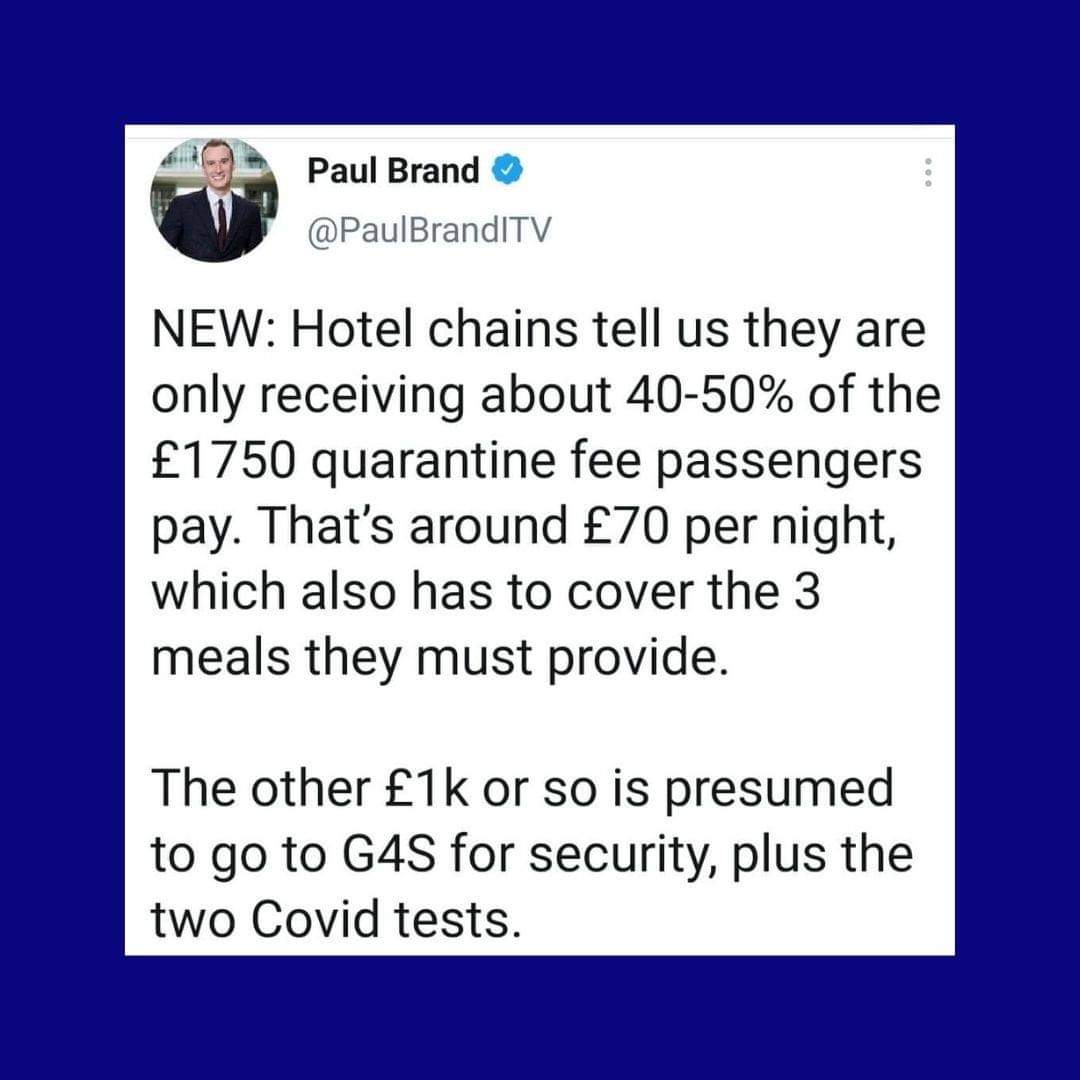