COVID-19 in the United States

Herainestold wrote: ↑
Wed Sep 08, 2021 4:05 am
The news from America just gets worse every day. Cases keep on rising with no end in sight.

...writes Herainestold when US cases have passed a peak and have started falling.

Herainestold wrote: ↑
Wed Sep 08, 2021 4:05 am
The news from America just gets worse every day. Cases keep on rising with no end in sight.

...writes Herainestold when US cases have passed a peak and have started falling. 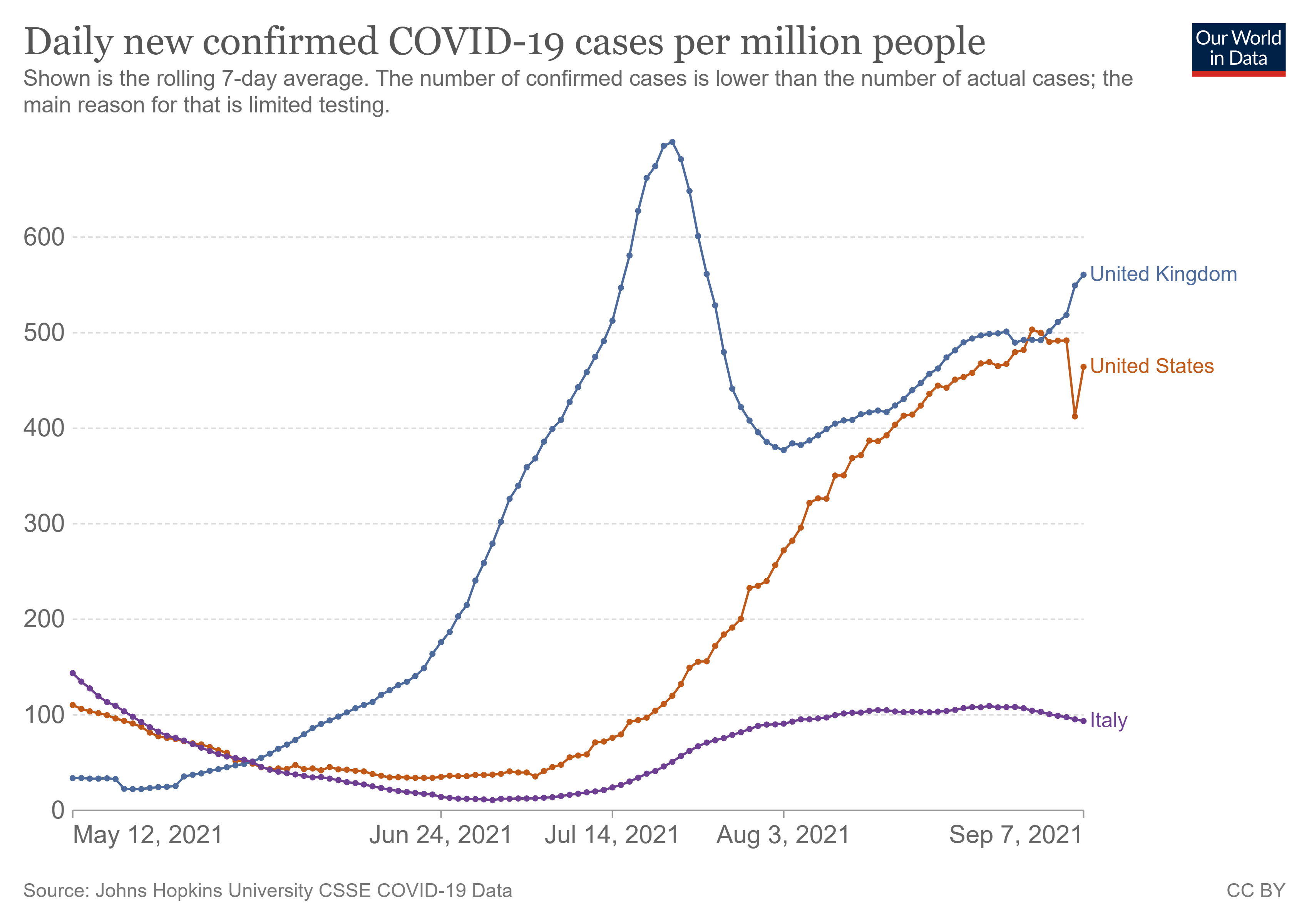 Personally I'd not set much store by the last two points they look a bit glitchy. But in terms of case rates, the UK is now worse, but it does of course have better vaccination coverage and therefore fewer deaths. 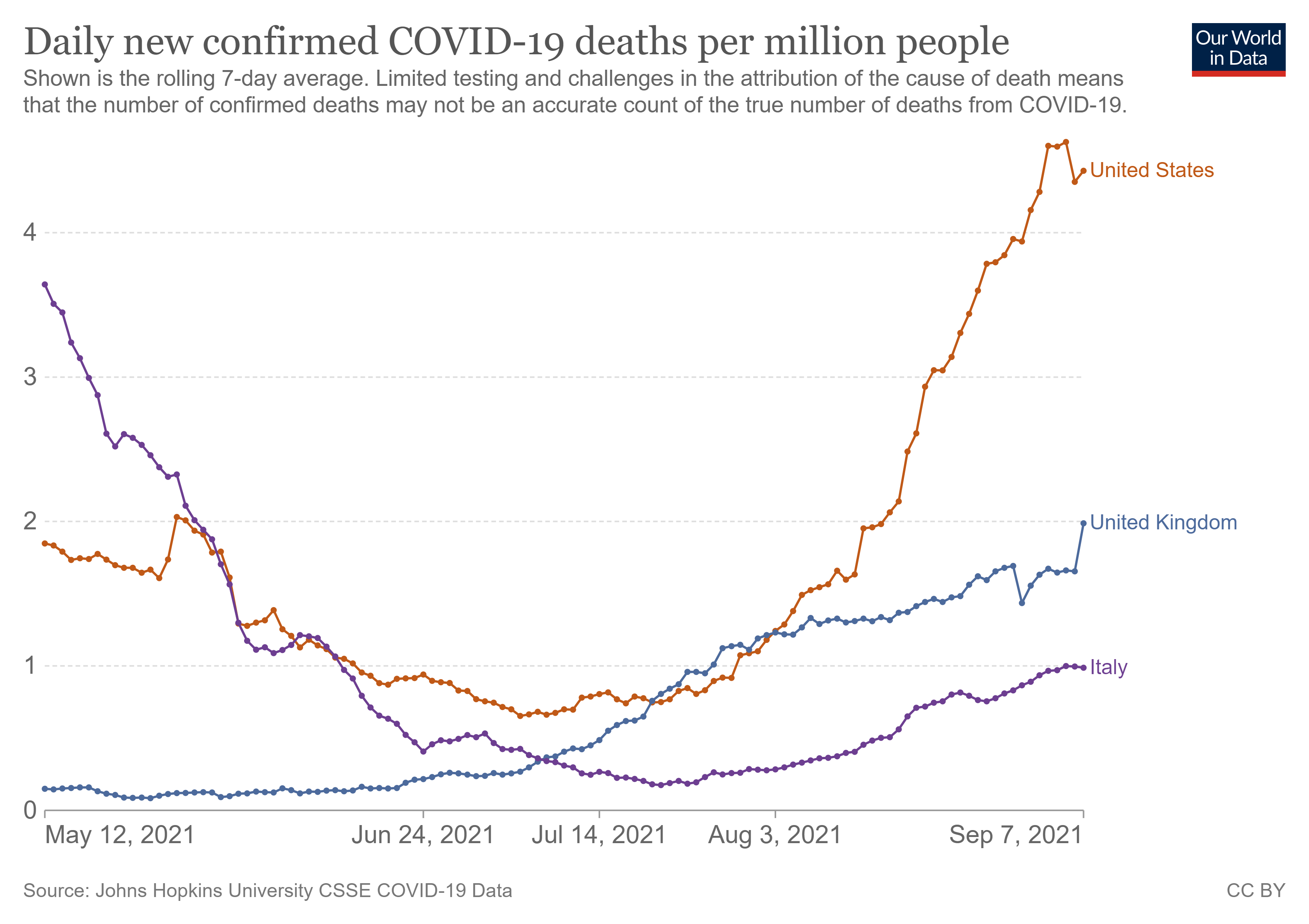 The US does however have a much higher positive rate than the UK so it's fair to say they have a high number of undetected cases: 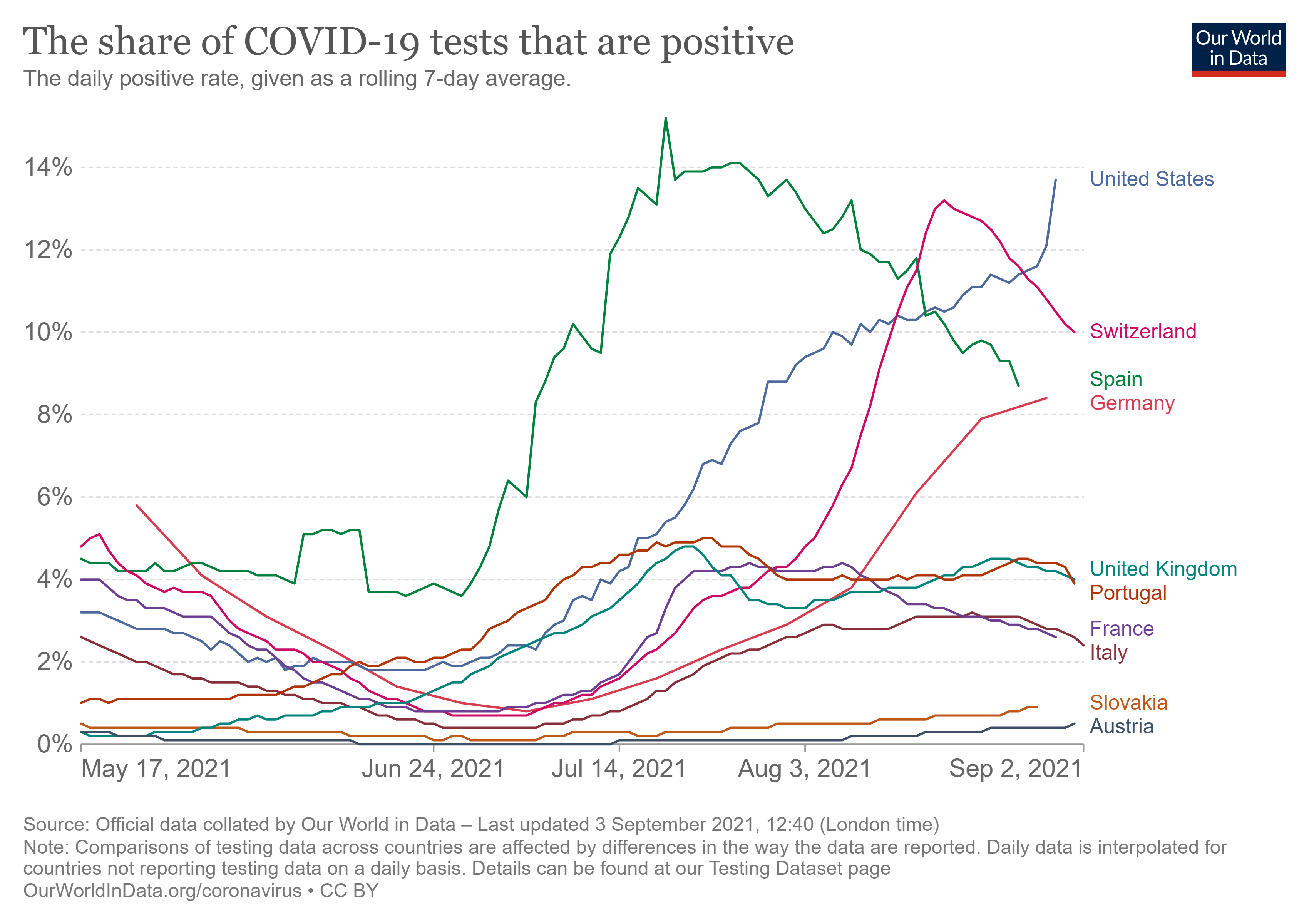 
“The endgame is to suppress the virus,” Fauci said. “Right now, we’re still in pandemic mode, because we have 160,000 new infections a day.”

“In a country of our size, you can’t be hanging around and having 100,000 infections a day. You’ve got to get well below 10,000 before you start feeling comfortable,” he said.

Labor Day is also the last major travel/party weekend of the summer, and approximately marks schools reopening in many states. So except a surge from that.

There'll also be a surge in testing from universities starting term, with testing requirements (at least in the sensible states) on in-person students.
Top

It'll go through the courts, obvs. I think some Republicans are going to explode.

There's a few other things there too, but that seems like the biggy.
Top

How can Biden possibly think he has the power to do this?

This is worse than Obama's presidential overreach.

This is worse than Obama's presidential overreach.

I imagine they will say "It's elf and saftey, innit." But with lawyer talk.
Top

Raymond Burke wrote:Then, there is the mysterious Wuhan virus about whose nature and prevention the mass media daily give us conflicting information. What is clear, however, is that it has been used by certain forces, inimical to families and to the freedom of states, to advance their evil agenda. These forces tell us that we are now the subjects of the so-called “Great Reset”, the “New Normal”, which is dictated to us by their manipulation of citizens and nations through ignorance and fear. Now, we are supposed to find in a disease and its prevention the way to understand and direct our lives, rather than in God and in His plan for our salvation. The response of many Bishops and priests, and of many faithful has manifested a woeful lack of sound catechesis. So many in the Church seem to have no understanding of how Christ continues His saving work in times of plague and of other disasters.

So many in the Church know f.ck all about basic biology or indeed about anything, you bigoted old c.nt, but at least the Pope has spoken out in favour of everyone getting vaccinated.

In all fairness to cardianl Burke, manipulation of people through ignorance and fear is totally the catholic church's MO, so you can understand him being a bit shirty about governments parking their tanks on his lawn, as he sees it.
Top

Will they use capitalist death panels to decide who gets treatment and who doesn't?
Top

Will they use capitalist death panels to decide who gets treatment and who doesn't?

With the efficiencies of capitalism this is done before people get ill by checking what sort of insurance people can afford.


“F**k Joe Biden" and "Trump Won" people chant as they eat at Vaccinated only food court without showing their vaccination cards.


“F**k Joe Biden" and "Trump Won" people chant as they eat at Vaccinated only food court without showing their vaccination cards.

America is a failed state.
Masking forever
Putin is a monster, Russian people are not.
Top

As expected, there's a big jump in the proportion of Omi in the US: clicky (The last two weeks are modelled, but I don't think they're that bad at it. You can click on the weeks and map to see bits in more detail. If you look at it in more than a week's time, it'll be different)

On the plus side, the Feds are going to supply about 1 and a half home tests for everyone. This isn't as bad as it sounds, it should ease the existing testing system, but it makes you wonder why they haven't been doing that already. Personally, I would have made Jan Paski announce it for the shiggles.

Round my way, we're at the bottom of a trough casewise and very low on the State rankings*, but there was a bit of a jump after thanksgiving and there's been slow rise after. Hospitalisations are increasing too. The general public and politicians are carrying on like that "this is fine" meme. The doctors seem worried, but they are the ones who have to deal with everyone else being stupid. One has just said "“If you are not vaccinated, you are out of luck.”

I wish she had said "sh.t out of luck", which would have suited the state better.


*For once, for the right reason!
Top

Up here we're about to break through the highest daily cases of the whole pandemic. That's with 82% vaccine uptake.
Top

Thats really not surprising, Omicron is no respecter of vaccination status.
The real test will be three weeks from now after the death rate lag is taken up.
Masking forever
Putin is a monster, Russian people are not.
Top

It was busy at the testing centre today (partner has very mild symptoms, I'm fine). It's not just due to everyone leaving it till after Christmas to get it done either. Everything has gone wooosh since my last post, noticeably before the 25th. A nurse friend says they haven't seen so many Covid cases in aaages.

I have no idea how long we'll have to isolate for if one of us is positive. State rules have not been updated since the CDC lowered their guidelines from 10 to 5 days yesterday. Work might have their own ideas about it too.

I am currently enjoying my days off from work by sitting around being bored, rather than going out and doing stuff.

I think we're going to get > 50% test positivity soon. It's at 43.76 today. Record cases. Hospitals might get overwhelmed again.

The hospitalisations seem to be rising much faster here than other places, the curve doesn't seem much shallower than the delta wave. I guess that's what you get for having a low vaccination rate.

There seem to be fake CoVID testing companies popping up, promising quick tests, and probably promising negative results to employers.

Heard about that going on in Baltimore just before Christmas, they reckoned it was about getting your information to do frauds - clicky, but I think it's more likely that your DNA would end up in the bin rather than be used for identity theft, as suggested by that article.
Top

The supreme court has given the vaccine mandate the boot, which does not surprise me.

It still applies to nearly all healthcare workers, as long as they take Medicare/Medicaid money. I think that might mean it still applies to me, but I am not sure. (I don't mind if it does). I'm expecting an email about it from a Big Boss tomorrow. I guess they can still make Federal employees test-or-vaccinate too.

Covid, along with various other important issues, is utterly hopeless in the US. Mainly due to the emboldenment of a substantial portion of our population with the ideas that it's ok to harm others by being a complete douchebag, as long as you're Christian.

That's not really what I was going to discuss tho. Too depressing.

I was just going to lament that getting the Pfizer booster and the flu shot on the same day was not such a great idea.

Ppl have been saying that the booster kicked their ass (for a day or so, tho FAR less so than getting covid likely would). And flu shots also may do this (but the last time I had the flu I almost died, so again, perspective everyone).

But getting both on Fri made my Saturday pure achy dog-doo heck (I'll skip the hyperbole of saying hell; it wasn't THAT bad).

To top it off, it's been very cold here (at least for those of us who are accustomed to mostly blaring heat*). That didn't help.

To add insult to injury, I didn't even get to meet Bill gates. What a f.cking Jip.

*everyone from Iceland, Finland, Siberia etc can just jump in an icy lake without me
Top

I just ordered my lateral flow tests, but here they're called at home tests, or rapid tests, or something. You get 4 per household*, and I have no idea when we might get them, or when we might be able to get some more.

Get yours here: clicky


*Not sure what you do if you live with more than 4 people and you want to test everyone.
Top

monkey wrote: ↑
Wed Jan 19, 2022 12:39 am
I just ordered my lateral flow tests, but here they're called at home tests, or rapid tests, or something. You get 4 per household*, and I have no idea when we might get them, or when we might be able to get some more.

Get yours here: clicky


*Not sure what you do if you live with more than 4 people and you want to test everyone.

That does seem a little lacking in numbers. How frequently can you order them, or is that a one-off 4 and that's your lot for ever?! Here in the UK, there are 7 in a pack and you can order a pack a day online. Not sure if it's different for ones you collect from a pharmacy or elsewhere as our pharmacy has been short-staffed recently so I've only been getting them online to avoid spending my entire lunchbreak in a queue.

ETA: By the way, your link doesn't work properly - you need "" around the covidtests.gov, I think

ETA2: No, that doesn't work either. You need the full link like this
Top
Post Reply
263 posts