Via this tweet, El País saying the true number of deaths is 44,868, rather than the 28,432 officially reported. I wonder if HMG suddenly woke up to the discrepancy recently, hence the sudden requirement for "quarantining" of returners.
Top

Brightonian wrote: ↑
Sun Jul 26, 2020 8:38 pm
Via this tweet, El País saying the true number of deaths is 44,868, rather than the 28,432 officially reported. I wonder if HMG suddenly woke up to the discrepancy recently, hence the sudden requirement for "quarantining" of returners.

My Spanish isn’t good enough to check in the article, but circa 44 868 looks like the figure for excess mortality in Spain. Absent any other catastrophe it’s reasonable to assume that real Covid mortality is close to that number (especially if indirect causes are included).
Top

I think there may be two reasons for the discrepancy here.

First, like the UK, lots of people have died of "almost certainly COVID" without a test. So those will show up in the excess mortality figures. I think I've seen 66,000 quoted for the UK on the same basis. This hasn't been discussed much in Spain.

Second, however, Spain is currently underreporting deaths even with a test. Here's what happens. Since the start of June, they have only been reporting, at the daily press conferences, deaths that took place on that day which had COVID-19 as cause of death. But most deaths take time to record. Typically it might take a week for the news that someone died in a small country hospital to make it to the national statistical office in Madrid. So if 40 people actually died today and they announce 2 deaths (say, those that took place in Madrid before 8am), the idea is that the other 38 will drip in at some future point. The plan was to have a "bad news day" every couple of weeks, when they catch up with those 38 other deaths times 14 days = ~500 or whatever.

There are two problems with this. The first is that smiling government officials get to have 13 days of "Hey look, hardly any deaths, yay us" and then one "oops, oh well, look at that squirrel/tomorrow's numbers". (Yes, this is absurd.) The second is that they haven't had a "bad news day" for 37 days now. But, like an unanswered e-mail, every day that goes by makes it harder to release the numbers.

Looking at the graphic in that tweet, there are three numbers:
- 28,432 --- the officially announced total. Compare with the UK's 45,759 --- or, perhaps better, with the UK's total just before that day a few weeks age when (IIRC) there was an update with a couple of thousand that had been omitted.
- 30,619 --- the number of confirmed cases. The difference of 2,187 seems reasonable given the 37-day delay I mentioned above; it would be about 60 per day.
- 44,868 --- the estimated total, which would correspond to the UK's estimated 66,000 (or whatever it is), as measured by excess deaths.
Sitting in a sleazy snackbar sucking sickly sausage rolls
Top

Their cases are up over the last few weeks at least. 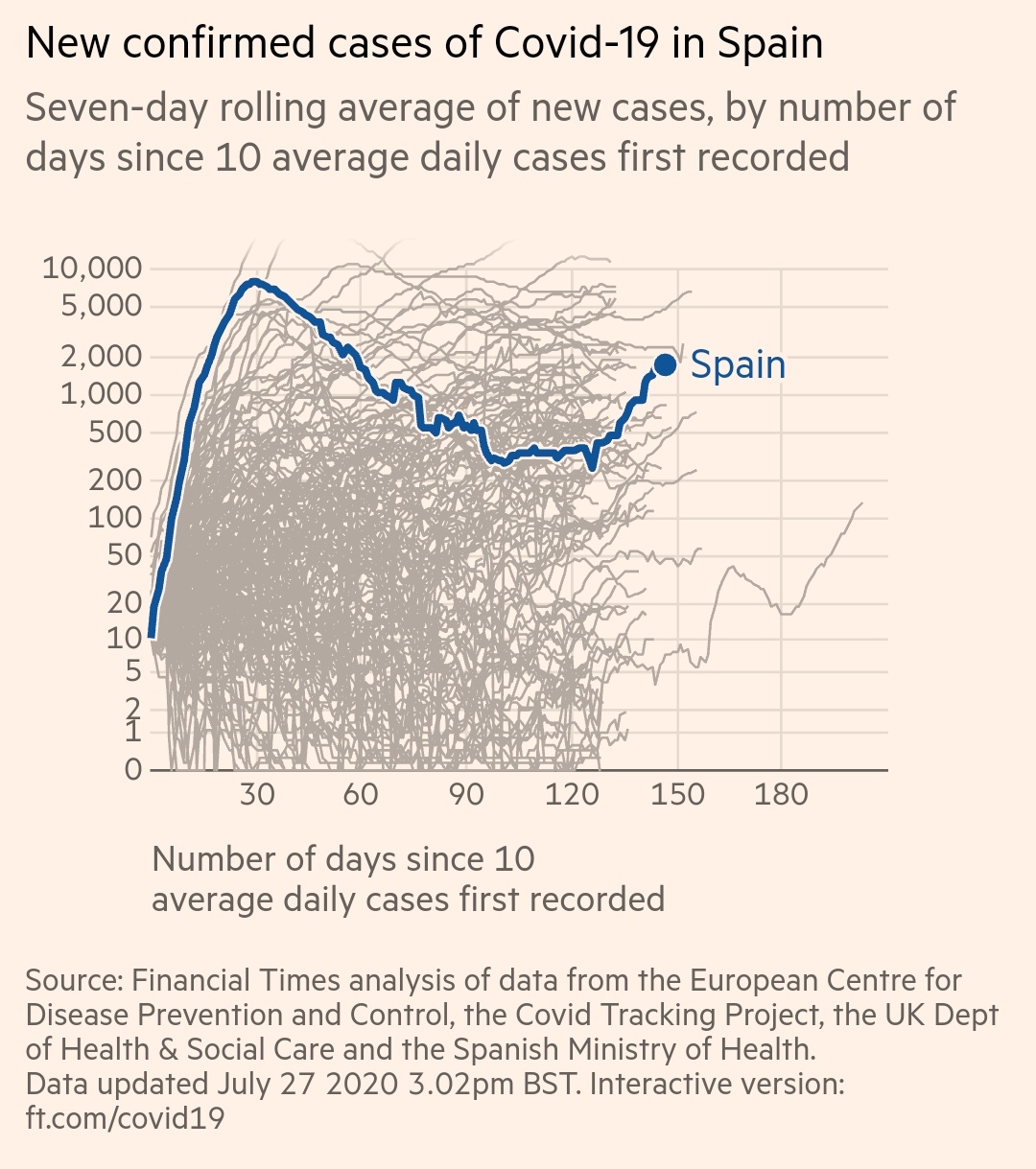 My avatar was a scientific result that was later found to be 'mistaken' - I rarely claim to be 100% correct
ETA 5/8/20: I've been advised that the result was correct, it was the initial interpretation that needed to be withdrawn
Meta? I'd say so!
Top

This is one of the things that makes international comparisons almost useless. They all report deaths in different ways at different timescales and the reporting of death following discharge from hospital varies massively too. There's no international standard put forward by WHO or ECDC for Europe either. Excess deaths is a reasonable measure but it does have a long lag and is only really suitable for looking back
Top