Italy hoped to kick off the campaign between 12 and 15 January.
molto tricky
Top

It's being suggested that if the EMA manages to approve the Pfizer vaccine on the 23rd of December that maybe it would be good to not wait three weeks to start vaccinating people.
molto tricky
Top


Germany, France, Italy and five other European states will coordinate the start of their COVID-19 vaccination campaigns, the countries’ health ministers said in a joint statement on Tuesday.

The countries will promote “the coordination of the launch of the vaccination campaigns” and will rapidly share information on how it is proceeding, the statement said, along with other commitments on areas such as transparency.

The statement was released by Italy and also signed by the health ministers of Germany, France, Belgium, Luxembourg, the Netherlands, Spain and Switzerland.

HOW ABOUT YOU RAPIDLY SHARE WITH US THE ACTUAL STATEMENT

Instead, all news outlets have copied and pasted in this Reuters press release and that's all I find when I try to google this.
molto tricky
Top

The numbers for each region don't seem to correspond to whole boxes though.

Accelerated approval from the EMA (on the 21st) might even mean being able to start on the 27-28 of December. Seems like the whole of the EU wants to have a "vaccine day".

I don't know why, but of all the news websites, MyPersonalTrainer.it seems to have the clearest list of numbers of doses, and then there's another list of slightly larger numbers, which is the numbers of health workers and care home residents, of which Lombardy has 356,824 out of a national total of 1,874,323. But these numbers have been used to decide how to share out the vaccine doses.

There'll be 294 points at which the vaccine will be given, 222 of which will have the ultra-low-temperature fridges; after the 7th of January 289 of them will have ULT fridges.

Italy has been struggling with its 'flu vaccination campaign this winter though.
molto tricky
Top

8 out of 10 Italians are willing to get vaccinated

No, not a new show on an Italian version of Dave (Italy doesn't have a Dave) but based on a survey of 1664 Italians, which is f.ck all really.

However, about half of those would rather "wait for better evidence of its efficacy" in a few months as if (a) they're trained virologists able to evaluate the evidence* or (b) vaccinating everyone as soon as possible isn't the best way to see if it works at this stage and (c) you wouldn't actually be obliged to wait a few months anyway unless you're either in a top-priority group or lucky enough to be walking past the door of the lab with the vaccines at the right moment towards the end of the day when the last few doses of an open box have to be used up and/or have relatives involved in the relevant bit of the health service.

So there's 19% who really don't want the vaccine,

* - I mean, even getting a slightly less efficacious vaccine is better than not getting one, unless they're holding out for a better one to come along and don't want to get vaccinated now and therefore miss out on the better one, but the difference in efficacy needs to be balanced against the risk of catching covid while you wait, and that's not a trivial calculation. Also, the Pfizer and Moderna ones are the more effective ones ready now but it's more likely that if you wait you'll eventually get the cheaper and easier-to-handle Oxford/AstraZeneca one (well ok apparently the Moderna one, despite using similar mRNA technology to the Pfizer one, it stable at normal fridge temperatures) which is less effective, if you're in the UK at least. I can't remember if I have a graphic somewhere explaining which vaccines Italy has invested in, but from here** I found the following numbers which I will list here below in the following right after this sentence which is ending now so here they are right here now:

(The numbers for Pfizer and Moderna are in addition to the first-trimestre doses, I think, because the total is supposed to be 202.573 million and these numbers are more than 16 million short of that.)

** - which is a couple of weeks old i.e. has the old date for expected EMA approval of the Pfizer vaccine before it was brought forward to the 21st so that vaccination can start in Europe on the 27th-28th;*** it indicates the 12th of January for the EMA decision on the Moderna one.

*** - Italy will set up primrose-shaped gazebos and is heavy on the Einaudi.
molto tricky
Top

The first doses from Pfizer are expected to arrive in Rome on Christmas day.
molto tricky
Top

10 boxes will be on their way to the Spallanzani hospital in Rome tomorrow, and then on Friday the armed forced will be involved in distributing 9 or fewer of them around Italy in something called "Operation Eos" for a few symbolic vaccinations on the 27th together with the rest of the EU; the first person to be vaccinated in Italy will be a nurse called Claudia Alivernini, followed by a social-health worker, a researcher, and two doctors.

I'm not sure if any of them have names similar to historical figures or if a charmingly stereotypical older gentleman will be able to just ring up and wander in to get vaccinated and then be on the news.

450,000 more doses are supposed to arrive on the 28th to actually get started properly.
molto tricky
Top

The small lorry crossed the Brenner pass earlier this morning with 10 boxes of vaccine. It will now drive all the way to Rome before doses are flown back up to the north of Italy. 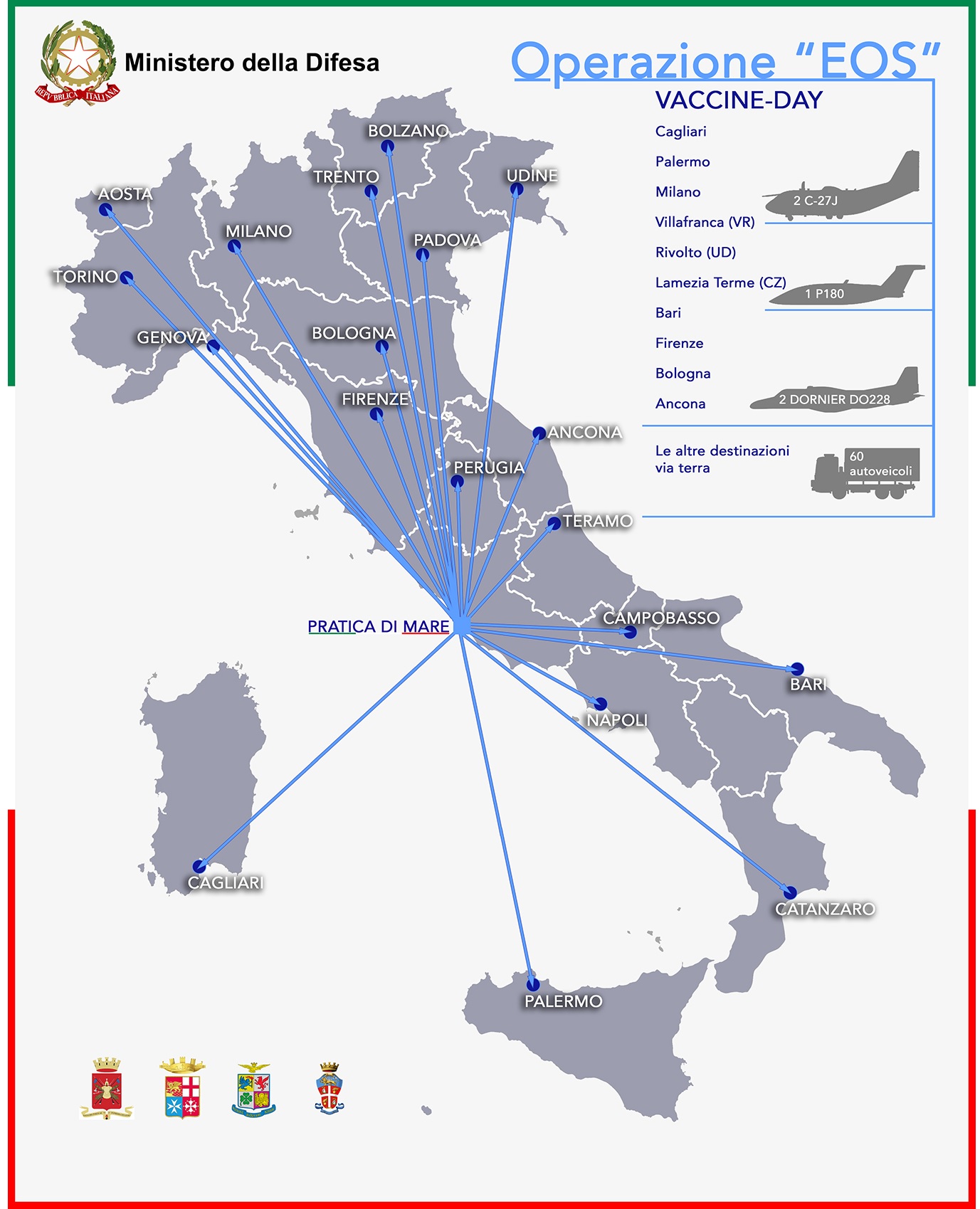 At the Ministry of Health's vaccine FAQ page I found a table of the estimated millions of doses of each vaccine which should arrive in Italy:

What does the Pfizer protocol say for how often you can take vaccine phials out of the fridge to wave them about in front of photographers? 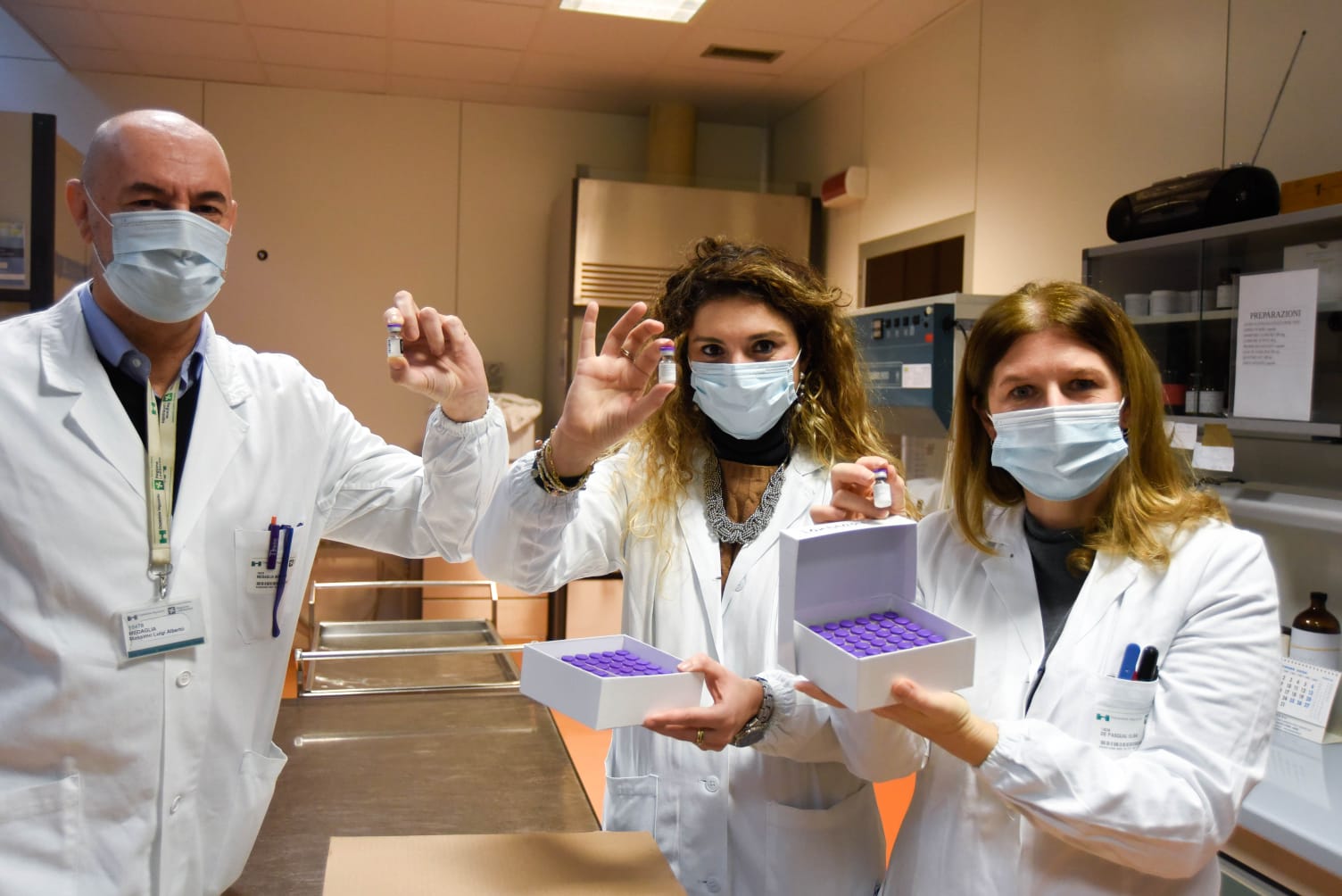 Italy has officially launched its programme of mass vaccination against Covid-19, prioritising healthcare personnel, followed by people aged over 80.

Vincenzo De Luca, the 71-year old governor of the Italian region of Campania, doesn’t fall into either of the two categories but he received a dose of the vaccine today anyway.
molto tricky
Top

Held up in Belgium by the bad weather, apparently.
molto tricky
Top

Held up in Belgium by the bad weather, apparently.

I think they arrived at midnight last night.

Meanwhile, EMA approval of the Oxford one won't be before the end of January, what with having to look at the actual data, and maybe decide if the accidental half--full protocol can be approved (which is not approved in the UK as of today's headlines because it's only been tweeted about and not actually published).
molto tricky
Top

Lombardy gets another 94,770 doses to start vaccinating today. (Well, the doses which Lombardy had until now were just a few symbolic ones.)

There should be five deliveries so as to reach a total of 491,400 doses by the end of January, having figured out a way to get six doses out of each phial instead of five. This means a box which contains 195 phials contains a total of 1170 doses, not 975.

Italy has already given about 14,000 Pfizer doses this morning; the plan is to give just under half a million per week during January.
molto tricky
Top

34,246 doses given, almost all of which to health care professionals. I don't know how persistent this link to the Italian covid vaccination dashboard will be.

What I can't immediately see is if there's anyway to download the data.
molto tricky
Top

shpalman wrote: ↑
Fri Jan 01, 2021 5:09 pm
34,246 doses given, almost all of which to health care professionals. I don't know how persistent this link to the Italian covid vaccination dashboard will be.

What I can't immediately see is if there's anyway to download the data.

45,667 doses given as of the end of yesterday which is a bit less than 10% of what's been delivered.

* - if the whole nation has ordered nearly half a million doses a week then it needs to step this up by an order of magnitude.

** - Lombardy has received 80,595 doses and given 2,171 which I think is the number I remember from when I checked yesterday morning i.e. they didn't give any on new year's day. If they can't be arsed to work on weekends and holidays they'd need reach a regime of >16,000 per week day or else I can imagine the government deciding to divide future deliveries up in a different way.

I mean, another delivery is due at the beginning of next week, but Lombardy's number won't go up because it's new year's day and then it's the weekend and then it's nearly "Befana" and there's no point just doing one or two days I wanna go to the mountains so yeah let's get properly started on the 11th...

Ok so I was being unfair, Italy managed to give a first dose to a whole 839 people today, of which 245 in Lombardy!
molto tricky
Top

And I was being even more unfair because obviously all the data hadn't come in; the total as of just over an hour ago is 52,037, so 6,370 done today. But Lombardy's sh.t number (only having given 3% of the doses they received) still stands.
molto tricky
Top

shpalman wrote: ↑
Sat Jan 02, 2021 9:57 am
I mean, another delivery is due at the beginning of next week, but Lombardy's number won't go up because it's new year's day and then it's the weekend and then it's nearly "Befana" and there's no point just doing one or two days I wanna go to the mountains so yeah let's get properly started on the 11th...

It's like I'm going to start my new-year diet... tomorrow...

I know the health service wants a Christmas holiday too (I expect this "10,000 a day" won't apply to the 6th, for example) but the harder they work now the less of a mess they'll be in by February. Especially as these first vaccines are going almost entirely to actually health-service personnel (of the 2416 vaccine doses given in Lombardy so far, only 12 have gone to care home residents).

I've heard that on the 7th they'll start vaccinating at the old hospital just up the road (currently I think they're only doing it at the big shiny new out-of-town one) and then next week they'll add a couple more sites in town.

Takes time to include all those guitar pedals you know.
https://twitter.com/mariofusco/status/1 ... 87072?s=19
Top

Yeah I don't want the Metal Zone vaccine I'll wait for the TS9.

There's a Klon vaccine but it's expensive and hard to find and not actually that much better.
molto tricky
Top

The pharmacists here were all on a course in November so that they'd be qualified to vaccinate people against covid but it got interrupted by covid.
molto tricky
Top
Post Reply
328 posts