lpm wrote: ↑
Fri Jul 16, 2021 1:34 pm
There's someone called Andrew Lilico who is a Telegraph guy and has got himself loads of publicity recently by trolling on twitter.

He's assuming vaccinated people transmit the virus half as well as unvaccinated. And so he says we have "crossed over". Infected vaccinated people transmit the virus more than un vaccinated, as they are more likely to be asymptomatic and unaware that they are infective. That is why we need NPIs, masking, distancing, testing, travel restrictions, etc. Especially for the vaccinated.
Delta changes everything.
Top

Herainestold wrote: ↑
Fri Jul 16, 2021 1:50 pm
Infected vaccinated people transmit the virus more than un vaccinated, as they are more likely to be asymptomatic and unaware that they are infective. That is why we need NPIs, masking, distancing, testing, travel restrictions, etc. Especially for the vaccinated.

Although we're down to only about 60,000 new 1st doses per day this week.
Top

You have in excess of 50,000 new cases today. Indonesia with nearly five times your population and with a lower proportion vaccinated had 54000.

Frankly your government are gobshites.
Top

Frankly your government are gobshites.

Alternative take: Since anyone over 18 in the UK who wants a vaccine has been able to get one for several weeks, there probably aren't all that many people left to come forward now. France has a similar problem (but with far fewer people vaccinated; lotta anti-vaxxers and homeofrootloops), and is now basically tying the important pleasures of French life (restaurants, cafés) to being vaccinated (or tested every 2 days).
Something something hammer something something nail
Top


I think that the weekend is more likely. But yes, this seems like another case of ministers being hopelessly behind where the curve is going.

I'm saying that because there's usually a jump in case numbers mid-week, as a day-of-the-week effect. But the 7-day average (which is less than 18,000 per day right now) won't go above 30,000 for another week or so.

The death rate is probably also now going to come up with a 9-10 day doubling time for week or so, to follow what happened in the cases.

By the way, the 7-day average for the UK is almost 40,000 cases per day, and it'll go over when today's numbers come in.
molto tricky
Top

One of today's is your Secretary for State for Health.
Top

Lol.
What ever happened to that Trump guy, you know, the one who was president for a bit?
Top

temptar wrote: ↑
Sat Jul 17, 2021 12:56 pm
One of today's is your Secretary for State for Health making sure as many people catch covid as possible.

More lol.
What ever happened to that Trump guy, you know, the one who was president for a bit?
Top

Not so lol.
What ever happened to that Trump guy, you know, the one who was president for a bit?
Top

And that's not including Wales.
molto tricky
Top

Incredible comic timing from the scriptwriters.
He has the grace of a swan, the wisdom of an owl, and the eye of an eagle—ladies and gentlemen, this man is for the birds!
Top

Who's gone for the headline "Sajid Covid"?
He has the grace of a swan, the wisdom of an owl, and the eye of an eagle—ladies and gentlemen, this man is for the birds!
Top

Indeed not. I had to replace my PC, but here's my latest plot of the Government dashboard. Rolling 7 day sums for admissions and cases, and rolling 7-day averages for MV bed occupancy. 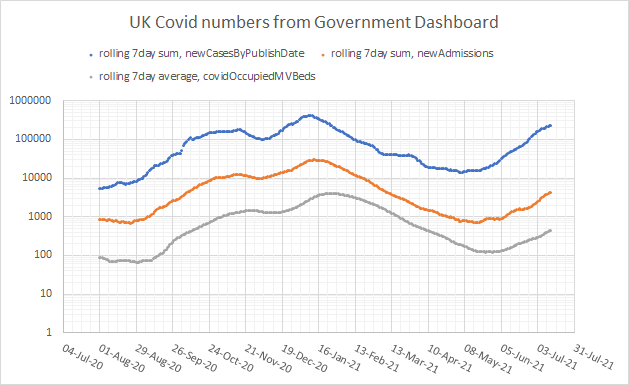 
Another hurdle I faced was that other scientists were offering different opinions. By early October the Great Barrington declaration was getting a lot of publicity as an “alternative” scientific theory. This was the dangerous proposition to allow the virus to sweep through the population quickly so that herd immunity could build up. The previous month, its proponents had been invited to present their thinking to No 10, a meeting thought to have influenced Johnson’s decision not to heed Sage’s advice to lock down.

The Great Barrington declaration was ideology masquerading as science and the science was still nonsense. Herd immunity by natural infection was, and still is, a coronavirus strategy that lacks credibility. I cannot even call it science. Nonetheless, conflicting expert opinions serve a useful purpose, as they do in climate research: they allow politicians and others, sometimes even scientists themselves, to pick a worldview that suits an ideological bias.

Cummings says: “In July I said to [Johnson], ‘Look, much of the media is insane, you’ve got all of these people running around saying there can’t be a second wave, lockdowns don’t work, and all this b.llsh.t. No 10’s got to be far more aggressive with these people and expose their arguments, and explain that some of the nonsense being peddled should not be treated as equivalent to serious scientists. They were being picked up by editors and by pundits like ‘Bonkers’ Hitchens [Peter Hitchens, the Mail on Sunday columnist].”

According to Cummings, Johnson rejected the idea of being more aggressive with the media, saying “The trouble is, Dom, I’m with Bonkers. My heart is with Bonkers, I don’t believe in any of this, it’s all b.llsh.t. I wish I’d been the mayor in Jaws and kept the beaches open.’


All the numbers vindicated what Patrick Vallance and Chris Whitty had been saying publicly, and privately to No 10, for a month: that things needed to change or the UK could see 200 deaths a day and 50,000 new infections a day by November. They were derided at the time for scaremongering. As November approached, Patrick and Chris saw their nightmares materialising. On October 27, 367 Covid-19 deaths were confirmed.

If scientists were advocating a lockdown, many politicians definitely were not. On November 4 I was invited to talk via Zoom to the Covid recovery group, formed of about 80 Conservative MPs. I explained why tight restrictions were needed by highlighting rises in infections, hospital admissions and deaths. They asked me questions such as: “What should I say to my constituents who don’t see much Covid?”

I kept coming back to the point that you can either act now for a shorter time or you can act later for longer. You have a choice but only when it comes to timing: you cannot choose whether to act or not.

The MPs listened respectfully and, in a passive-aggressive sort of way, were apparently thankful for me appearing before them. But did I change anyone’s mind? No. Their minds seemed already made up and I believe the majority went on to vote against restrictions.

Dominic Cummings has shed disturbing light on the events of September 2020 and the efforts made to persuade Johnson that a circuit-breaker was needed. The prime minister did not want to act. Cummings claims that, to try to change Johnson’s mind, he organised a meeting on Tuesday September 22 at which Johnson was presented with the case numbers and infection rates by Catherine Cutts, a data scientist newly recruited to No 10. She showed Johnson the current data and then fast-forwarded a month, to role-play the scenario of infections and deaths projected for October.


Cummings says: “We presented it all as if we were about six weeks in the future. This was my best attempt to get people to actually see sense and realise that it would be better for the economy as well as for health to get on top of it fast. Johnson basically said, ‘I’m not doing it. It’s politically impossible and lockdowns don’t work.’ ”

And with numbers added. 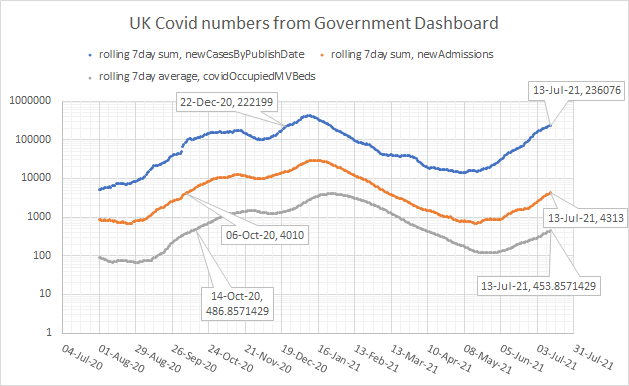 No, he's decided that he doesn't have to.

The complete collapse of UK self isolation is much anti lol though.

Talk about completely and utterly Barnard Castling a key pillar in our Covid defences, one that was supposed to continue after 19 July.
What ever happened to that Trump guy, you know, the one who was president for a bit?
Top

Good luck with convincing the hundreds of thousands of people currently self isolating that they need to continue. And they are all going to be maskless in a pub, shop, office or on public transport from tomorrow. Or arguing about why their human right to be maskless is being breached.
Top

Oh, turns out they will after all.

But that nice Mr Jenrick has just carefully explained to Andrew Marr why it was fine that they weren't. He must be chuffed
Top

But that nice Mr Jenrick has just carefully explained to Andrew Marr why it was fine that they weren't. He must be chuffed

"Leadership - how not to do it"

Take the easiest and most immediately-popular course of action even if it'll look bad shortly afterwards. And take the course of action that inconveniences oneself the least, especially if it makes you look as though you're above the rules... but then flip flop if it looks unpopular.
Have you considered stupidity as an explanation
Top

Unbelievable. Like, literally.
What ever happened to that Trump guy, you know, the one who was president for a bit?
Top

Why is anyone surprised that the Government that’s run by someone with famously poor impulse control is poor at controlling its impulses?
Top

Because he's a Populist, so we keep expecting him to pick the most popular thing in every situation.

But he always f.cks that up as well.

He's really popular despite, just think how he could be even more popular because.
What ever happened to that Trump guy, you know, the one who was president for a bit?
Top
Post Reply
5923 posts