Get your science fix here: research, quackery, activism and all the rest
Post Reply
7 posts • Page 1 of 1

A question about something I saw this morning.

Passing a lawn that had been trimmed short some time ago, it was beginning to get a bit dry, I saw dozens of small insects flying around, very fast, at just above the top of the grass, occasionally resting or walking for a short time on one of the leaves remaining from all the wild flowers that grew there during lock-down. They stayed on the grass, ignoring the few flowers around - mainly poppies.

I think they were tiny wasps. They were about 1cm long and had stripes that were 'straight' round their bodies, rather than of lumpy shapes like hover-flies.

Anyone any idea what was going on?
Some people call me strange.
I prefer unconventional.
But I'm willing to compromise and accept eccentric.
Top

Some hoverflies are more stripy than lumpy, maybe it was a hoverfly?

Apparently digger wasps like hanging around lawns in the morning but I had a look on google images and they don't look very waspy/hoverflyy to me. Also said they're solitary and it sounds like you had a crowd.
Top

This has some ideas on what wasps might be doing hanging about on a lawn https://todayshomeowner.com/how-to-deal ... your-lawn/

Eating grubs/larvae, looking for sugar, and nesting/burrowing seem to be the favourites.
Top

Aitch wrote: ↑
Mon Sep 06, 2021 5:21 pm
I think they were tiny wasps. They were about 1cm long and had stripes that were 'straight' round their bodies, rather than of lumpy shapes like hover-flies.

I take it from the information you choose to give, that you are not accustomed to identifying insects.

1cm is not so tiny for a wasp. There are loads of seriously tiny wasps. 2mm type size.

This is a basic start for distinguishing the orders - Key features of each order of insects sorry if that is insultingly basic.

As you can see from this article on the hymenoptera, the suborder Apocrita includes all the ants and bees and but only some of the wasps. Two other suborders contain wasps (though wood wasps are also called sawflies), and two further suborders of sawflies. Then in you look inside Apocrita, that's a real mess too. Parasitica is all wasps, Formicidae is all ants, but Aculeata is a mix of bees, wasps, and velvet ants.

Most wasps are parasitic wasps, including many that are not in Parasitica. Mostly tiny things that lay their eggs inside the eggs and larvae of other insects, and indeed other small animals. Many of them just plain black. Though there are also plenty of spectacular large parasitic wasps like the Giant Woodwasp. We are barely aware of these tiny parasitic wasps. If these were parasitic wasps, maybe there were lots of tiny insect eggs/larvae there that they were interested in. Or maybe they were something else entirely.

At this time of year, there are a lot of flying ants around. They look like small wasps, because, after all, they are all hymenopterans. Maybe they were hovering around an ant nest because they were flying ants. Ants can be striped as you describe, though perhaps not so common.
Top

Yeah, they could be hover-flies - I didn't get too close and they were whizzing about like little mini Concordes!

However, I had a stroll back there this morning, at about the same time to see if they were still at it. Managed a couple of pics - though not great. 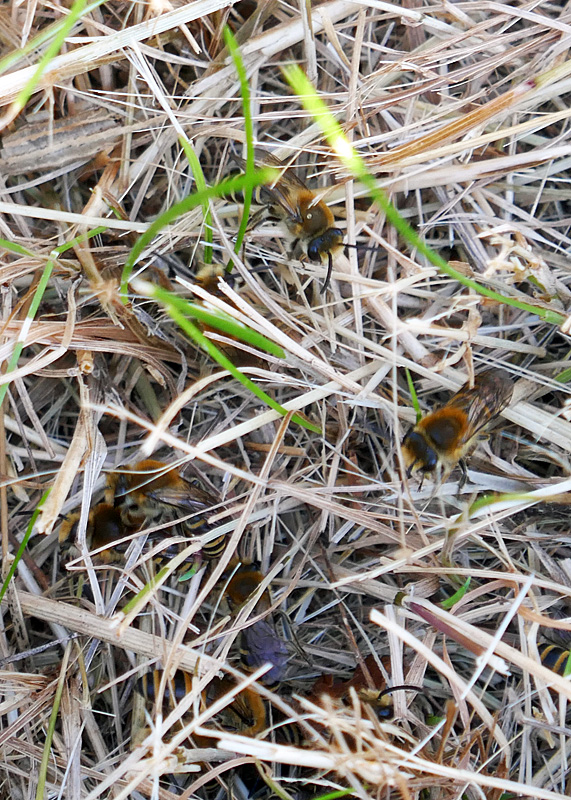 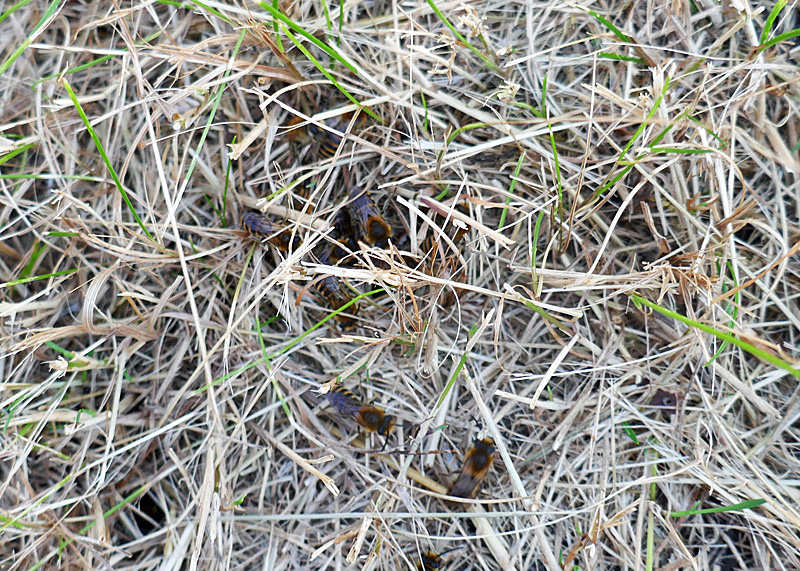 They appear to be mining bees of some sort, though I thought they were generally solitary. There were a group of them around a small hole in the ground, looks like they may be settling in. Don't know why the rest were whizzing around over the rest of the lawn, defending the new nest?
Some people call me strange.
I prefer unconventional.
But I'm willing to compromise and accept eccentric.
Top

Andrena dorsata seems possible. Many mining bees, such as the common Tawny Mining Bee, Andrena fulva, are active mainly in the spring. But A. dorsata has a second wave in late summer.
Further info ETA: note the distribution in GB, from Shropshire and Norfolk southwards, but not in most of Wales.

Many mining bees, although solitary, are gregarious and dig their mines in colonies.

Hairy hymenopterans are mostly bees, but not all bees are hairy.
Top

The single best tell for distinguishing hymenopterans (wasps, ants, bees, sawflies) from flies (diptera) and other things is the shape of the mouth parts. Hymenoptera have biting mouthparts, with a mandible on each side whereas flies have mouthparts for piercing and/or sucking It gives an entirely different look to their face.

Once you have realised this, and got used to it, you should be able recognise hymenopterans pretty easily. They are one of the groups easiest to spot at a glance, despite them being probably the most mimicked of insects. There are many flies, beetles, even clearwing moths, who try to look like stinging bees and wasps to scare things off. Though one of the most remarkable mimics I came across, on a trek in the Himalayas, was huge biting fly that looked like a harmless humming bird hawk-moths, and was mistaken as such by some of my companions on that trek. Clearly it was trying to look innocuous to keep you calm and get a bite.
Top
Post Reply
7 posts • Page 1 of 1